During the summer of 1656, King Charles of Sweden assembled an army for the final campaign to capture Warsaw. This would require Swedish troops garrisoning parts of northern Poland leave to join the main army. Those strong-points formerly held by Swedish troops would be replaced with troops from Brandenburg and Prussia. Generalfeldmarschall Otto Christoph Freiherr von Sparr was charged with this task and nearing the final stronghold, he found the approach barred by Polish troops. 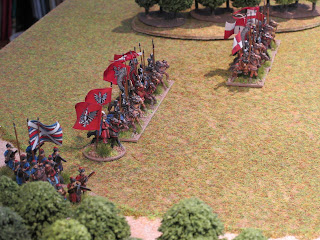 Uncertain if this was the vanguard of an army or an isolated detachment, von Sparr formed his two columns into a line of battle and after a quick reconnaissance surmised both sides were of equal strength; the Polish having an advantage of cavalry,

Placing his trust with the infantry and artillery, von Sparr attacked the Polish cavalry in centre supported by the Brandenburg and Prussian cavalry in echelon on either flank. 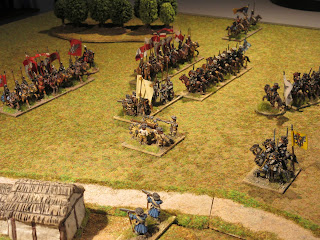 Against the Brandenburg left, the effect of musketry and artillery fire proved devastating in eliminating a Polish banner.

The remaining Polish banner was set upon by Prussian cavalry forcing the Polish commander to call for a general retreat. The action was brisk, taking no more that 45 minutes to conclude (3 turns). 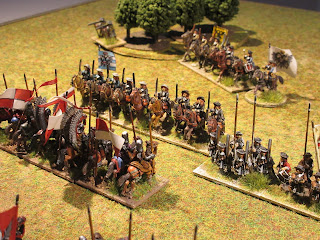 What began as a simple reconnaissance escalated into a heated conflict from which the Poles found difficult to extricate themselves. Taking advantage of the favourable outcome, the Elector of Brandenburg, Frederick Willem, despatched more troops to his second in command, von Sparr, to engage the Poles once again. A second ‘victory’ just might prompt the allies of the Poles to return to the Crimea.

From their shallow crescent formation extending beyond the Brandenburg battle line, von Sparr deduced the Polish had also received more cavalry reinforcements. Breaking the long line of horse, the Polish artillery in centre were supported by a small contingent of infantry, but nowhere else were there any infantry to be seen.

To fend off possible encirclement, Brandenburg and Prussian infantry were evenly divided to cover both flanks, leaving the majority of cavalry to form three echelons in centre. This was a diversion from the standard deployment of cavalry on the flanks of an infantry battle line. 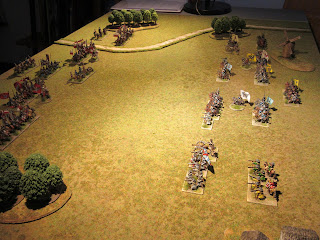 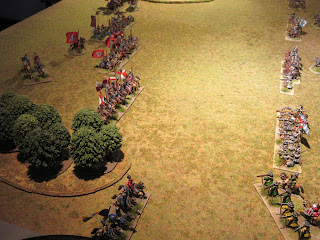 Musket fire from the Brandenburg and Prussian infantry proved effective at blunting the Polish assault. 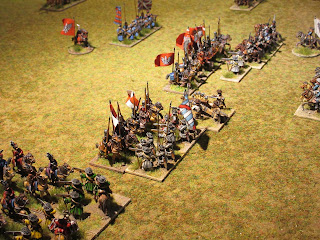 The threat to the Brandenburg left now contained, signalled the moment to shift battle elsewhere. The Brandenburg right, consisting of four regiments of infantry supported by dragoons moved against the Polish left which had remained idle since the start of battle. 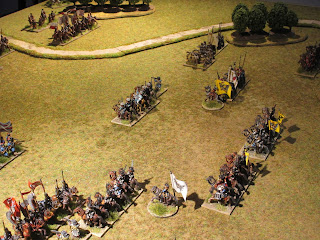 Von Sparr, gaining the upper hand on the right, felt the moment was right for the coup de grâce. This was done by the uncommitted Brandenburg and Prussian cavalry forming the centre. Blunting the attack on the left, then shifting the battle to pin the Polish on the right, left the Polish centre vulnerable. After three hours (12 turns), von Sparr had his decisive victory. 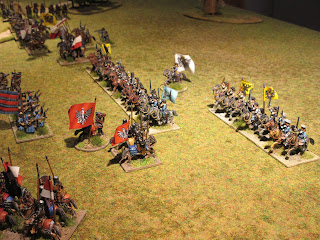 The game was by no means a sure thing for the Germans, but it did underscore the effectiveness of infantry to disrupt cavalry effectiveness. The Polish-Lithuanian Commonwealth was slow in creating a standing army and relied for the most part on the royal houses and nobles to raise its armies.

These are worth replaying at a later date.