Down the Moonbeam Road

Readers of Michael Moorcock’s Elric of Melniboné may recall a reference to the “Moonbeam Road”, which appley describes the multitude of projects that make up Melniboné of the 18th century. For the moment these are focused on the refurbishment of the current collection, replacing old flags with ones of a new design, mapping the Melnibonean world, construction of terrain pieces with an elven theme and lastly, to develop and flesh out the story behind the Melniboné of the 18th century.

This began ten or eleven years ago when steampunk had gained popularity with stories and photos appeared in various forums. One enthusiast added movie images from French and Italian comedies set in the 18th century and the idea did have an appeal. This coincided with the completion of the Elric novels; the needed ingredient to bring the Melnibonean Elves to life. And so, the project was begun. 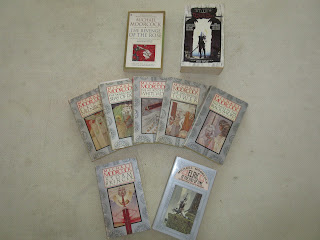 The basic figures are Russian Seven Years War of the earlier period complete with standard line infantry and grenadiers with their peculiar mitre hats. Lacking illustrations or references, the original uniforms were somewhat bizarre, however, the collection was completed. The sad part of this tale, the plans did not accommodate an opponent, leaving the collection to remain in their boxes.

Purchasing new figures remained problematic during the pandemic and in leu of purchasing new I began a makeover of existing collections. Some armies would receive new paint, others new banners made and two large collections were totally reorganised. A completed collection was quickly followed by another until finally, the Melnibonean Elves moved to the work bench.

Following an inventory of the collection, figures formed new regiments and sketches were made for the uniforms of line and guard units. As the figures were painted, a story began to develop that would serve as a foundation for the “how and why” of Melniboné of the 18th century.

Subsequent posts will present the history, stories and anecdotes along with battle reports and other construction projects.