Down the Moonbeam Road – Chapter Two

“The meeting of the war council reached its end giving the emperor the moment to recapitulate a number of key points. Plans for the upcoming campaign had taken shape and the objectives were clearly detailed for the admirals and generals present. The campaign against the Southland tribes was set for early next year and to ensure efficient coordination of land and sea forces, training exercises were scheduled for next month on the island of Hador. The emperor would be present for the final day which meant we too would be present.”

Arms akimbo, the professor listened patiently to his student’s report, each presenting their findings, albeit sprinkled with much speculation and theories. Map coordinates did correspond to known geographical locations on earth, yet sketches and maps showed a different land mass, leaving Gerard to suggest this may be the result of tectonic plates shifting in other directions or the result of volcanic activity and melting snows of an ice age?

Thanking them on the amount of work done, the professor now asked them to focus their efforts on one particular question. The disparity of development between the northern and southern lands was apparent from their research, but the two realms paled in comparison to the rapid evolution of the Elven realm. This begs the question, ‘how were they able to maintain their secrecy while advancing their civilization, spread over a dozen islands? Explain their technological superiority over the northern and southern realms? Was there any mention in the journal of travel between places and times?” adding “If so, how was this accomplished, surely, this was not achieved through magic?”

“During the maneuverers of final day, Arundel made rough sketches of the flying marvels and added a rough map of the Southland territory between the written passages. A shadow fell on his writing and glancing over his shoulder he noted a slender figure behind him and ceased writing.

The onlooker, with a hint of a smile said, “There is more yet to come.”

Just then the sound of horns and drums followed by the roar from tens of thousands drew Arundel’s attention away, as this signalled the appearance of the emperor. Glancing back over his shoulder, the veiled figure was nowhere to be seen.

Martin advanced the screen to another passage dated the 125th day, year 1649; “Forces exploring the Southern Waste lands met roving warbands and after a brief encounter, defeated the enemy. Survivors fled into the dense jungle making pursuit hazardous.” Reading this, Gerard began to imagine the conflict between the elves and their old arch-enemy, the green-skins. 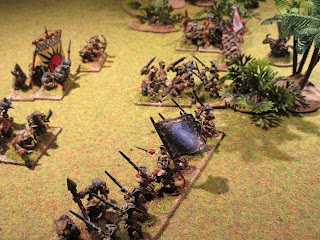