The Imperial armies would renew their fight against the Ottoman Turks following their victory in 1683. The Ottoman forces, then commanded by the Grand-Vizier Sari Süleyman Paşa, were different than the grand army that camped near Mohács. The mounted arm were no longer in the majority and despite their smaller numbers, the army could rely on the support of the Janissary Corps and artillery.

The Imperial Army, 40,000 strong, was led by Charles of Lorraine of Austria and an additional 20,000 German troops under Maximilian Emanuel, Elector of Bavaria and the Margrave Louis of Baden-Baden brought their number to parity with the Ottomans.

On the morning of 12 August, the Ottoman army was deployed on Nagyharsány Hill, with its wooded slopes.
Facing this, the Imperial Austrians formed on the right with the Bavarians forming on the left. The troops of Baden-Baden were held in reserve. As both forces are of equal strength, this would be fought as a big battle game with three commands per side.

The battlefield.
From the illustration you will note the Imperial battle line facing the dense woods. Ahead of the woods are positioned Ottoman infantry with the cavalry and Janissary Corps held in reserve near the fortifications. The defensive position can be seen at the top of the illustration. The game table is therefore, divided into two segments; the first where the main battle took place and a second, if needed, would reveal the fortifications.
Victory is reached when the enemy has lost two commands regardless of size. 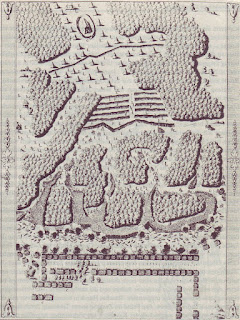 Tomorrow, part two, the actual battle.
Posted by Timurilank at 02:19

Very interesting. Can I ask where you found the Ottoman OOB?

Actual accounts (Wiki and other websites) of the battle do not give specific regiments with their strengths There were 8,000 cavalry and a Janissary Corps present with the remainder filled by garrison, provincial and mercenary troops.

As the numbers were equal for both sides, I elected to make this a big battle game with the standard three commands totalling 36 elements and scale the troop types accordingly. I dis give the Ottomans slightly more cavalry to balance the game.

Thanks Robert. I was hoping you had some good OOB detail :(

I will just have to enjoy your fine blog and look forward to the next installment :)